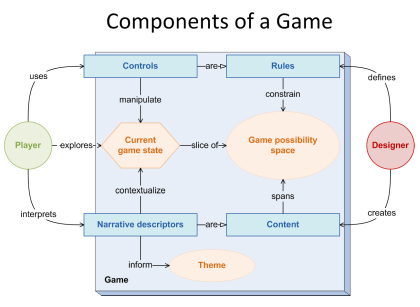 It has just dawned on me that I have never published my diagram illustrating the structural composition of games as interactive systems. I have originally put it together for the presentation of my seminar paper on Journey and semiotics (my slides can never be published because they contained way too many copyrighted pictures) and got very positive feedback on it, but it had not occurred to me until now to make it publicly available. I will also take this opportunity to explain the very low-level terms I use to talk about games and how they relate to each other.

Games of any kind (social, tabletop, computer, etc.) are systems, meaning that they consist of multiple interacting parts. Games-as-systems are furthermore...

With this in mind, we proceed to outline additional basic definitions:

Both rules and controls are referred as "mechanics" by different sources, which is why I prefer these less ambiguous terms. The term "narrative descriptor" was, to my knowledge, coined by Salen and Zimmerman. Using these basic concepts, we can derive more abstract and esoteric ones:

All narrative descriptors of a game together shape its theme (a term used here as in Burgun 2014, rather than in its more literary sense; it is alternatively referred as "conceit" and "motif" in some sources): the core metaphor attached to the game-as-system in order to communicate abstract rules via symbols that a player can interpret (in the semiotic sense). Narrative descriptors thus provide context to the player's interactions with a game by associating them with real life experiences, such as a humanoid bitmap representing a human being.

All of the player's (controls-mediated) interactions with the game state comprise the gameplay, while gameplay and theme together facilitate the core fantasy of the game (see Portnow and Floyd 2016, Costiuc 2019, etc.). These concepts didn't fit into the diagram because they emerge from the usage of the system, rather than its constituent parts, but I think it's nonetheless important to point out how they fit into the overall picture.